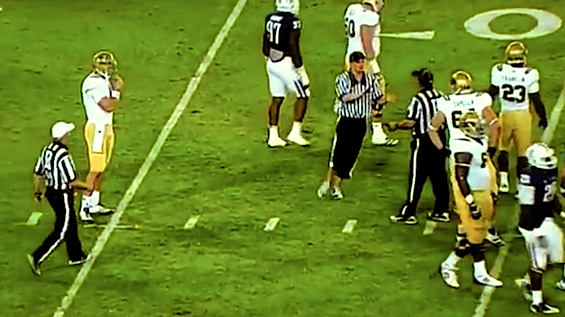 Well wasn't this an exciting week! If we take a moment to reflect on what we've learned this last week, the first thing we would certainly put on the list is that running onto a football field dressed as a referee, promptly followed by some streaking will get you felony charges! Felony?! Yup, that's right kids, 23 year old Jace Lankow was arrested following his highly publicized stunt this week. In case any of you missed it, here's a few videos to recap the scenario:


Now aside from the annoying voice in the second video, one thing we can say for sure is that you'd want to keep this sort of behavior under wraps, especially since it quickly resulted in a brawl between players with both sidelines clearing. Right away, you might think, "Alright, he's going to get charged for trespassing." Believe it or not, though, felony charges were brought up against this young man for felony impersonation. Whew! Now I'm no lawyer, but even though I don't condone this sort of thing, I think felony impersonation seems a bit extreme. In any case, the first part was certainly a good chuckle and we'll have to see how this pans out.
In other news, we saw a few changes to the HorizonWebRef.com system this week that were nothing incredibly life altering, but certainly helpful (we think), nonetheless. First up, was the addition of the new group sharing feature. Contact groups were previously available to all individuals, but now administrators and schedulers can create contact groups and then share them with other people. This is a great way to help make master lists for your entire organization. Next up, we added the ability to put a time frame on WHEN coaches/ADs could see their officials. We've been asked many times to incorporate this so now you can allow them to see their officials, but restrict it to a certain timeframe, like say, Game Day Only, or 1 Day Before the Game or 3 Days Before the Game, etc, etc. Finally, we updated the mobile version of the site with larger fonts, a more optimized view and bigger icons/buttons for easier touching on touchscreens. Now initially, we did catch a little flak from some users about the new mobile version so we tweaked it a little more since the initial change. We've added the Game Type & Teams back to the schedule view which were initially removed. We appreciate the feedback and are certainly open to other optimization if people still feel we're missing something. Hopefully everyone enjoys the easier to use version.
Anyways, that's all for this edition. We've got some exciting new features coming up soon, so stayed tuned!
TIM
Technical Support
HorizonWebRef.com
Posted by HorizonWebRef.com at 1:36 PM